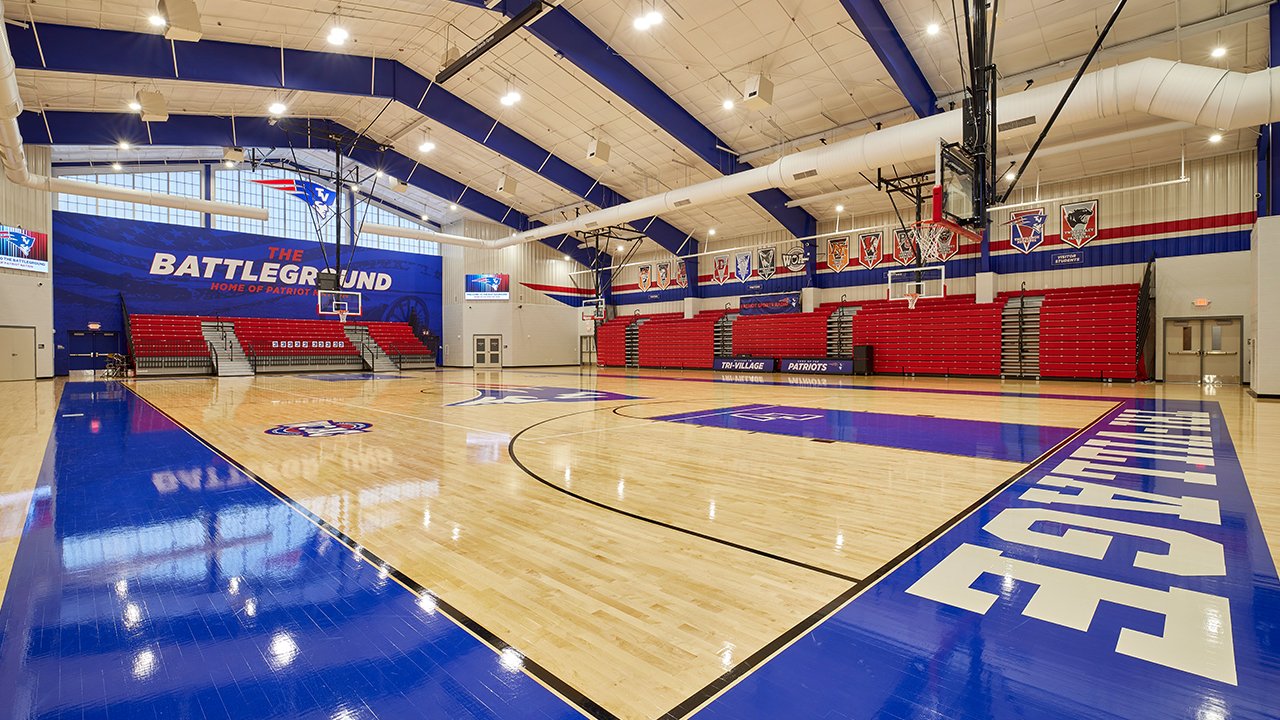 We interviewed Matt Gray, Level MB Vice President, about the new PAC/ELC at Tri-Village Local Schools. Here is what he had to say:

1. What was the scope of Level MB’s work on the Tri-Village project?
Level MB competitively pursued and was awarded the Construction Manager at Risk (CMR) Role for the Patriot Activity Center (PAC) and Patriot Early Learning Center (ELC) in the fall of 2021. The scope of work consisted of a managing and overseeing all construction for the 33,000 square foot PAC and separate 6,000 square foot ELC. Work was started on the ELC in Jan of 2022 and completed in August 2022 for the start of the ‘22-23 School Year. Meanwhile, construction of the PAC started in March of ‘22 and was completed in November of ‘22 for the start of the ‘22-23 Basketball Season.

2. Were there any special challenges on this job?
The challenges on this project were consistent with the many challenges we face on every project these days: material procurement and availability. Scheduling and management becomes exceptionally difficult when the delivery dates are pushed back or, worse yet, completely unknown. Construction is no longer about how good your plan is but more about how good is your backup plan? This is where our team excels. We do so by 1) having the right PEOPLE at the table, and 2) COMMUNICATION….. Communication is key!

3. What would you like to say about the Level MB team at Tri-Village?

Honestly, I would say that I expect our team to be great and they did not disappoint. Our team owned every moment of the project, we took care of the client, the architect, our subcontracting partners and lastly…business.

Josh Wall (Preconstruction Lead) got us off to a good start with a well-executed plan and approach to budgeting efforts and bidding in a chaotic climate. He worked hard at preparing great documents that ultimately led to a seamless transition into construction. Great job, Josh!

Jeff Tudor (Project Engineer) put in a number of long nights out of the gate with the letting of all subcontracts and chasing down submittals. Jeff stayed involved throughout with assisting in the project and serving the client. He is working hard now during the closeout and punch list process. Well done, Jeff!

Stephen Bowser (Superintendent) executed his 4th Straight Fieldhouse Project to near perfection. Stephen’s skills and ownership of the job have grown in proportion to the growth and complexity of the projects he has overseen. Stephen owns the schedule and balances a tough role that requires respect and motivation of subcontractors, while catering to our client, the budget, safety and schedule. He executed this role at the highest level. Great job, Steve!

4. What would you like to say about all of the partners involved in this project?

This group was a blast to work with! They were knowledgeable and professional but what I appreciate the most is, they were fun! I looked forward to my Tri-Village days. Josh Sagester (Superintendent) became a good friend over the course of this project. He was clear, decisive and to the point. He wanted a top-notch facility for the staff, students and community. Kim Chowning (Treasurer) was also a true professional. She runs a tight ship, financially, and expected an account for every dollar spent on the project. However, as opposed to the stereotypical “bean counter”, Kim had a ton of fun with the project and was a real pleasure to work with! Special Shout out to Joanie! She was a blast to work with, has a heart of gold and is a mean cook! The Level MB Team is currently enrolling in weight watchers as result of all the good food Joanie provided for the team! The rest of the crew at the school including Chris, Darleen and Shelly were all awesome. We definitely made a number of new friends.

Matt Hibner (Principle), Taylor Luth (Architect) and Jason Schulte (CA)  were all top notch. We planned design deliverables that would align with material procurement and the project schedule. They held up their end of the bargain! The team was professional, accommodating and responsive. Meanwhile, they delivered a fantastic building design. We will be gratefully showcasing this design on our website and social media for years to come!

Thanks to all of our subcontracting partners for the efforts they gave on this project. Special thanks to Dave Nagel Excavating for getting us out of the ground quick and doing it in style; Gostomsky Masonry for manning up and getting our critical path bearing walls up and ahead of schedule; Cotterman Roofing for never disappointing; Concrafted Painting for always being a pleasure to work with, Response Fire Protection, Watkem Mechanical for a job well done, Austin Hartzler at Garber Electric for owning his role as foreman for the project and Bill Bowermaster at Garber Connect!

Schlechty’s!  Haydon & Destiny have a good thing going. Those contractors sure do love to eat. I’m sure we certainly stimulated the local economy. Good people, great place!

In closing, everything about the Tri-Village Project was both fun and successful. We as a team accomplished the mission safely (0 Recordables), ahead of schedule and under budget and in style! Honestly, I would not expect anything less from this group. I would do it all over again tomorrow. Thanks again to all involved!